As per article 366(12A), GST or Goods and service tax is an indirect tax in India which is levied on supply of goods or services or both except on the supply of alcohol for human consumption.The purpose of GST is to incorporate multiple indirect taxes that were getting charged from suppliers and consumers by the Central and State government.

Though Goods and Service tax law have been introduced with some unique principles but it also consists of some important components of old Central and State tax laws.It is also influenced by VAT/GST legislations of several countries like European Union,Australia and Malaysia etc in addition to International guidelines of OECD.

3. There will be no interest, late fee, or penalty for companies with less than Rs. 5 crore turnover; For the bigger companies, interest will be 9%.

4. The last date to opt for a composition scheme has been extended till the last week of June, 2020.

5. The due date for payments under the ‘Sabka Vishwas’ scheme has been extended to June 30, 2020.

The Indirect taxes which were getting charged by the Central Government until 1 July 2017 are Central Excise duty,duties of excise imposed Medicinal and Toilet Preparation Act, additional duties of excise,service tax,Central surcharges and cesses,additional duties of customs(CVD and SAD) while the state taxes which were encompassed in GST are CST,State VAT, Entertainment tax,Purchase tax,Tax on lotteries,luxury tax,state surcharges etc.The constitution has been amended to dispense the coexisting powers to Centre and state for levying GST, where Centre will be imposing GST on sales of goods and States on the provision of services. 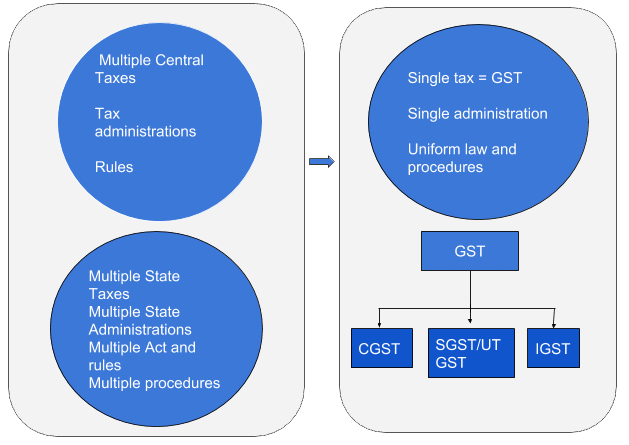 History of GST in India:

The idea of GST was recommended by the tenth Prime Minister of India, Mr.Atal Bihari Vajpayee in year 2000 for which an empowering committee was formed by state finance ministers to prepare the structure of GST.The representatives from the Centre and the State were urged to study several aspects of the proposal and come up with reports on exemptions,taxation of inter-state supplies,taxation of services.The committee was headed by the Finance Minister of West Bengal, Mr.Asim Dasgupta till 2011 where Mr.Vijay Kelkar between 2002 to 2004, being an advisory to Finance Ministry led the task force for highlighting the problems in the concurrent tax structure and reporting how they can be rectified by adopting GST.

In 2006,the Finance Minister Mr.P.Chidambaram proposed to subsume GST in budget with a long term objective of introducing uniform taxation structure in India after which 1st April,2010 was decided as the date on which GST would be implemented in India.But the empowered committee released first discussion paper in 2009,which became the point of discussion between centre and the states.

In 2012,Congress put forth the bill for implementing GST which drew the disapproval from the other party due to concerns over clause 279B due to which finance ministers of different states held meeting with finance minister of India to resolve all the issues.

In 2013 during the budget session Finance Minister declared that states will be given compensation of Rs 9000 crore as compensation, convincing state finance ministers for co-operating with the government to implement indirect tax regime.

In February 2015 Arun Jaitley, the new Finance Minister declared in budget speech that GST will come in to effect by 1st,April 2016 but to difference between states and parties and other legal issues it was delayed for a year.

Its an effective tool to determine the tax value applicable to commodity and services and to calculate the value of product and services.

For removal of GST:

Role of CBIC (Central board of Indirect tax and customs) in GST:

GST rates are assigned to various goods and services by the GST Council. There are some products which can be bought without GST, but there are most others which have GST amounting to 5%, 12%, 18% and even 28% GST of the original price. The GST rates for goods and services have been changed from time to time since the new tax laws were introduced in 2017. In February 2020, the GST council meeting was chaired by the Union Finance Minister.

Here are the GST percentages of some items:

Here are the steps for GST registration from the official GST portal for all taxpayers.

A GST Return is a document that has information about the income to be filed by a taxpayer. This information is there to find out a taxpayer liability to pay tax. Under the GST ACT, all registered dealers need to file their GST returns along with purchase, sales, input tax credit, and output details. All businesses need to file every second month as well as annually.

This is the official document issued by the concerned authorities for businesses enrolled under the GST system. Businesses with turnovers of Rs. 20 lakh or more than that, and some special businesses need to register under the GST system. If you are a taxpayer, you can get the GST form from the GST official website. The certificate is not for physical use, but is only digital. The document contains the GSTIN, trade name, legal name, constitution of business, date of liability, address, period of liability particulars of approved authority, types of registration, signature, approving authority’s details, and date of certificate’s issue.

Based on the transaction’s type, there are 4 types of GST. They are:

The fill form of this is Goods and Services Tax Network. It is responsible for the management of the IT system in regards to GST portal.

The work of the GSTN includes:

Its main functions include:

If taxpayers have any confusion on doubts regarding their GST filing, they can get in touch with the authorities directly through the GST helpline: https://selfservice.gstsystem.in/

As of 21st, September 2020, 21 states in India have chosen to borrow which has been proposed by the GST tax council. It was done to meet the shortfall in compensation in the middle of the pandemic from the center. The states have chosen Option 1 or Borrow, which allows them to borrow up to the tax collection shortfall, a sum estimated at Rs. 97,000 crore.

The other option allows them to borrow a compensation package of Rs. 2.35 lakh crore.

As on July 20th 2020, the government has decided to gradually introduce mandatory GST e-invoicing from the 1st of October. This shall be mandatory for those businesses that have a turnover of Rs. 500 or greater.

18% GST on all hand based sanitizers

This year, there shall be a GST of 18% on all hand-held sanitizers, according to the AAR or Authority for Advance ruling.

GST collection for June 2020 has reached Rs. 90,917 crore gross. This is however 9% lower than the same period last year. However, this is higher than that in the Month of both April and May 2020.

Small taxpayers shall not be charged interest on GST

Small taxpayers who average a turnover of Rs. 5 crore shall get a waiver of their late fees and interest, provided they fild the form GSTR-2B for all supplies affected during May, June and July. This needs to be done by September. Till 6th July, such taxpayers won’t have to bear the burden of paying interest for late filing of GST returns. Interest rate is reduced to 9% as well till 30th September.